Our houses are beginning to look more and more like houses, as the bricks that we spent so long deliberating over are finally going up on the outside walls. Ever wondered what a bob line or a wall tie are? Watch the video to find out!

OK, so we are back on site, been a week or two. And the most exciting thing is that the bricks are starting to go up. If you can see there, you can begin to see piles of bricks ready to be laid, and soon enough, here it is. Here’s the beginning of a brick wall.
It’s final stage in House no. 56. Let’s go around, take a look.
The brick’s being laid, this piece of string there, which I won’t touch but I’ll sort of point to, that is a line. It’s either called a plumb line or a bob line, I think it’s a bob line or something. Anyway that obviously allows you to make sure you’re keeping everything nice and straight. Can you see that little thing there? That is a wall tie. That’s basically what connects the bricks back to the wall. Oh, you can see a few more of them down there. And here we are, coming along very nicely.
This is our brick which took a long time to choose with what’s called a strop joint.
Over here is our sample panel, with our various different joints we had to test out to see which one we liked. The top one’s recessed. You can see that actually, quite a big difference. It looks darker, but it isn’t darker, it’s just recessed, but makes a massive difference.
Here we are in no. 58, you can see windows stacked up, ready to go, some white on the inside. They’re all on site which is nice. You can see… can see you there? Yeah, there we go, a sort of… what’s called a pearl beige.
Let’s go up and have a look around. Now this house, for the sharp eyed amongst you will notice… the purple. Now the purple is an airtight membrane. In the house next door we used white, and this one they used purple. Kind of depends whether you’re feeling kind of regal or not. 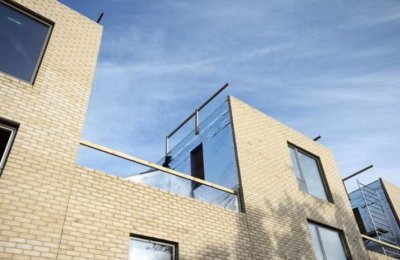 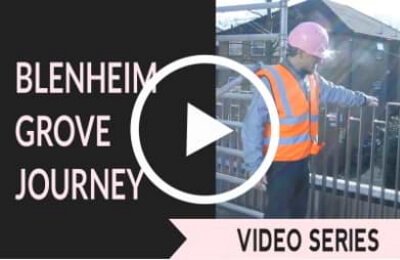