“Residential use on that site? …Not a chance”, chuckled the planning officer rather cruelly after my girlfriend and I had bought an unloved, overgrown and dilapidated terrace of garages at auction in 2004. Five years later and we have just had our first neighbours’ party in the new house.  Five years is not considered a particularly long time in a self-build project, but during that time, my girlfriend had become my wife, she had given birth to one child and was expectant with a second.  It had taken this long to overcome the sea of objections from local neighbours and get planning consent, to succeed in building within the very tight site constraints and to find contractors who could actually understand the drawings.

Both objectives were accomplished with the split level, which offsets the floors by half a storey.  It satisfies the complicated geometric rules surrounding the overlooking and overbearing of neighbours, but has the added benefit of creating a three dimensional open space which suits us as a family so well.  It spatially interconnects the kitchen and the kitchen table with the dining room and the workspace but gives each of these spaces a half-level separation.  This allows adult and child activities to co-exist happily.  Each of us can find our own space and inhabit it within the building but still feel connected to the others.

Having succeeded at planning, we then had to find a contractor to build it.  We went to tender to four local contractors who all, bar one, pulled out of the process.  They were not interested, it was far too complicated, they couldn’t really understand the drawings and there was other ‘lower lying fruit to pick’ elsewhere.  In the end, we found a German manufacturer of bespoke prefabricated clay and concrete walling who could make the entire structural shell in the factory and bring it to the UK on the back of a (surprisingly) few number of lorries.  They were able to erect the building in a matter of three weeks.

Once the Germans were on board, we were left to fill in the gaps and had to find some local ground workers to pile the entire boundary of the site including the underpinning of a local electrical substation.  We had to find people to roof, to clad, to fit the windows, to fit the interior and so my job went from design, planning and legal expert to construction manager.  It was a collaborative process between architects, contractors and me in the middle pushing them all the way and it has benefitted from this.

Five years after buying the plot we moved in.  From the outside (which is under the influence of the planners), Zog House is a smooth white rendered modernist-influenced cube rising from exposed rough and wild landscaping.  This juxtaposition continues inside with plaster offset by exposed concrete and warm natural flooring.

From the outset, we were keen to create a modern design that reflected a modern family home with a design that wasn’t ‘minimalist living’ but one which was robust enough to withstand the normal rough and tumble of young family life.  The use of exposed concrete might not sound very family friendly – but the concrete is raw and marked, and looks better as it ages unlike the ubiquitous white plaster which seems to need repainting every year.

It stands up to the crashing and bashing of a 2 year old and since it absorbs the heat in summer it keeps the house at a lovely even temperature throughout the year.  The split level allows us to have quiet time in the kitchen or in the study while our toddler and his friends play in the living room.  We are separated but still connected.

If you’d like to read more, here’s a link to the development guide on Zog House.

Want to custom build your own home? Sign up to our custom build register and be the first to know about our upcoming projects 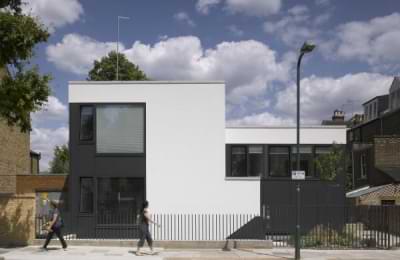 How to find a plot – Gus’ top tips 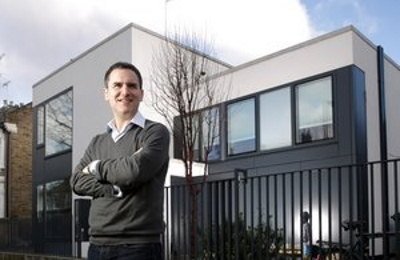